New Muynak's EP is out! Bat Flight on all streaming services.
Skip to content

Listening to songs of Crossing Borders I realized that some of them needed more work and some kind of evolution. This led to release of three EPs. The first one is this, including an extended version of “A whale’s escape”, a new version of my first single: “Space Balkans” and a another version of the track giving its name to the record. I shot the cover photo in Andenes (Norway) in 2010. 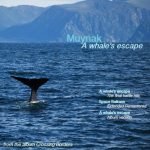